Commonly accepted misconceptions about tornadoes often lead people to make mistakes when preparing for tornadoes – so read up on these myths!

“Opening the windows in your house before a tornado will reduce damage by balancing the pressure inside and outside the structure.”
False! Homes are damaged and destroyed by the extremely strong winds in a tornado, not pressure. If a tornado is approaching, you should seek shelter immediately. Taking the time to open all of your windows will put you in danger and will not protect your home from forceful winds.
“Tornadoes cannot cross lakes, large rivers or wide bodies of water.”
False! Tornadoes that form on land can cross bodies of water, including rivers and lakes. Tornadoes can also form on water. These tornadoes are called “waterspouts.” Never think that a body of water will protect you from a tornado.
“Tornadoes never strike the same area twice.”
False! Tornadoes can strike any area at any time, regardless of past history. For instance, Cordell, Kansas was hit by tornadoes on the same day, May 20, three years in a row. Also, three different tornadoes hit the same church in Guy, Arkansas on the same day.
“A tornado is more likely to hit a mobile home park.”
False! Tornadoes are not more likely to hit a mobile home park, but the chances of them doing more damage and destruction to mobile homes are greater than to other structures. There are thousands of mobile homes located in tornado alley, and the damage seen in mobile home parks is significantly worse than what would occur in a neighborhood of frame homes. Even the weakest of tornadoes can flip and destroy a mobile home, when a frame home would receive little to no damage in the same storm.
“Tornadoes can always be seen from far away.”
False! Not only do tornadoes not always have to appear as a visible funnel cloud, but they can also be hidden by heavy rainfall during the day or by darkness at night.
“If I am near a highway overpass, I should abandon my vehicle immediately and take shelter there.”
False! While a highway overpass is a sturdy structure that may offer protection from flying debris, it will not protect you from dangerous winds. In fact, an overpass can act as a wind tunnel and may cause accelerated wind that collect debris, causing you more harm. If you are in your vehicle and a tornado is approaching, you should pull your vehicle to the side of the road immediately, get out, and lay flat in a nearby ditch covering your neck and head.
“The safest place to take shelter from a tornado is in the southwest corner of a basement.”
False! While it was once widely believed that debris would not fall in the southwest corner of a structure that has now been rethought. The safest place to take shelter during a tornado is an interior room on the lowest floor of your home or building, as far as possible from exterior walls and windows. Even in a basement interior walls can provide additional protection from flying debris.
“If a tornado is not coming directly towards me, I am out of harm’s way.”
False! Tornadoes do not follow a specific path or route, and can change directions at any time. The only safe place to be during a tornado is in a location that offers shelter from high winds and debris.
“The damage to homes during a tornado is caused by an explosion from changes in air pressure.”
False! Homes are damaged by the strong winds produced by a tornado, not by the changes in the air pressure.
“Downward-bulging clouds mean that a tornado is forming.”
False! While downward-bulging clouds that show signs of a rotating motion can certainly mean a tornado is forming, not all downward-bulging clouds indicate a tornado. Some of these clouds are simply storm clouds and are completely harmless.
“Tornadoes do not hit big cities.”
False! Tornadoes can hit anywhere at any time. Several large cities have been hit by tornadoes throughout history, including Dallas, Miami, Minneapolis, Oklahoma City, Wichita Falls, Salt Lake City and St. Louis.
“A tornado cannot travel up and down hillsides.”
False! Tornadoes can travel up and down hillsides, and are just as violent and dangerous. Living on a hill will not protect you from a tornado.
“A tornado always forms and appears as a funnel cloud.”
False! A tornado can cause damage on the ground even when a visible funnel cloud has not formed. Also, if you see a funnel cloud that does not appear to be touching the ground, the wind and circulation may still reach the ground and cause extensive damage.

Missouri accounts for six of the 25 deadliest tornadoes in United States history. 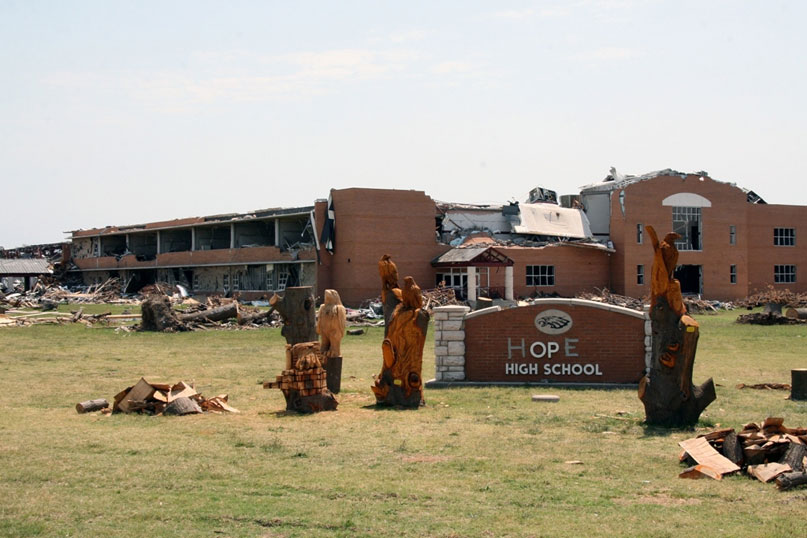 On Sept. 29, 1927, an EF4 tornado tore through downtown St. Louis, destroying more than 200 city blocks. There were 79 fatalities and 550 injuries, and it ranks as the 25th-deadliest tornado in the United States.

On the afternoon of May 9, 1927, a tornado struck Poplar Bluff, destroying many buildings downtown. Ninety-eight people were killed, making it one of the deadliest on record.

The Tri-State Tornado of March 18, 1925 was the deadliest single tornado in U.S. history, killing 689 people in Missouri, Illinois and Indiana. The tornado caused devastating damage over three-and-a-half hours while traveling along its 219-mile long track. This tornado also was the third-fastest tornado on record, traveling at nearly 60 miles per hour.

A devastating tornado moved through St. Louis and East St. Louis, Ill. on May 27, 1896, killing approximately 255 people and injuring more than 1,000 others. The tornado was responsible for at least $10 million in damage and is ranked as the third-deadliest tornado in United States history.

On April 18, 1880, Missouri was struck by numerous tornadoes statewide, killing a total of 151 people. The most devastating damage was in Marshfield, where nearly every building was destroyed or significantly damaged and 99 people lost their lives.

When a Tornado Strikes

It’s important to know how to stay safe if a tornado is in the area. Learn what to do if a tornado strikes while you are at home, in a mobile home or at school. Watch the videos.